Who doesn’t love some enchiladas? Shredded meat in a tortilla smothered with sauce and cheese? I’m in! I’ve previously posted a recipe for enchiladas verde and also a very healthy version of enchiladas. And this time I share with you my spicy roja sauce! And for the record, these aren’t terrible for you if you pay attention to the ingredients you buy.

-2 habanero peppers (only use 1 if you want it mild)

-3 or 4 small sweet peppers or 1 red bell pepper (If you like your sauce sweeter rather than spicy, consider using roasted red peppers)

-1 large can of tomato sauce

-Tortillas (I bought a package of whole wheat and a package of spinach, they were only 110 calories which isn’t bad for a flour tortilla. In the end, Kyle and I felt the spinach was much tastier. Also, the whole wheat stands up better to the sauce and doesn’t get soggy as the white flour tortillas usually do- unless of course you fry them first which is customary)

This recipe yielded two separate trays of 5 enchiladas. I made one for dinner and placed the other in the freezer for a weeknight when we have no food in the house!

In a hot saute pan add olive oil, garlic and peppers. Season with salt and let cook for 5 minutes or so.

Add tomatoes and tomato sauce to the pan and puree using a hand mixer. Bring to a boil. 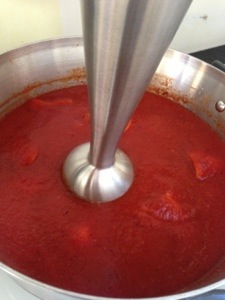 Rinse your chicken and place them into the sauce with salt & pepper. Bring to a low boil then cover and simmer on low for roughly 20 minutes.

Take the chicken out of the sauce and set aside to cool. Turn heat off the sauce as well.

Using two forks (or your hands which is sometimes easier) shred the chicken apart. When your chicken is shredded, sprinkle salt, pepper and ancho chili powder on top and mix together. 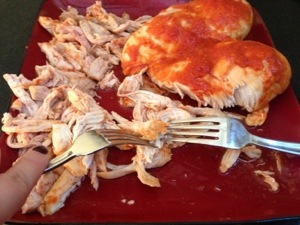 Put a thin layer of sauce in the bottom of your baking dish.

To assemble your enchiladas, put your chicken, chopped onion, fresh cilantro and a mix of each cheese in the tortilla. Roll it very tightly and place in your baking dish. 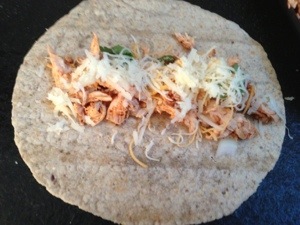 Pour a layer of sauce over the center of your enchiladas and top it with the manchego cheese. You can choose to drench them all in sauce but I like my tortillas to remain a little crispy so I do it this way.

Bake in a 350 degree oven for roughly 30 minutes until the sauce and cheese are bubbling. Top with fresh cilantro.

Serve with a side of black beans which I cooked with onion, lime juice and salt! Cheesy-saucy-goodness.