Last night was one of those times where the fridge was pretty bare.  I knew I had boneless pork chops and bok choy I bought a few days ago but not too much else to work with.  I’m not a huge fan of pork chops because to me they don’t really have much flavor, but when you get tired of chicken, they can be a great alternative.  I usually like to stuff them with gorgonzola, caramelized onions and spinach for a real punch of flavor.  But, of course the only ingredient I had of the three was an onion.

I stared in the fridge a few minutes annoyed I didn’t have any cheese until I noticed the left over ricotta from the eggplant rollitini.  I didn’t know where I was going with this but I figured it would be a tasty cheese to stuff the pork with the caramelized onions.  Boy was I right.  This photo might not make the dish look as delicious as it tasted (my photographer wasn’t with me today), but this was the best pork chop I’ve ever made!! Kyle agreed.  I find it so pleasing when you think you have nothing to make and then the outcome is better than you could have expected! 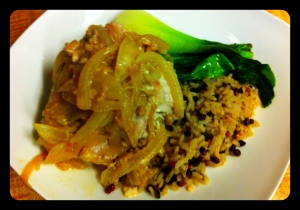 Cut an onion into thin slices and place in a medium hot pan with olive oil.  Let them brown, lower the heat and then cook for at least 15-20 minutes.  The longer you cook them, the sweeter they will be!  Toss in a dash of kosher salt and pepper.  Meanwhile in a small non stick pan toss in the pine nuts and let them brown.  Be careful not to burn them!

In a small mixing bowl add the ricotta, bread crumbs, chopped toasted pine nuts, salt & pepper.  Mix together well.  When the onions are done toss it all together.  I recommend leaving some of the mixture out so you can top the pork chop later! It’s amazing how much flavor those onions bring to the dish!

Using a sharp knife, cut an insert in the middle of the pork chop creating a nice sized hole you can stuff.  Spoon in the mixture and pack as much as you can.  If necessary, use a toothpick to hold it all together.  Salt & pepper each side of the pork.

Using your misto, spray some more olive oil in a saute pan (you used for the onions) and put the pork in.  Brown both sides of the meat.  Then add chicken broth to the mixing bowl with any leftover cheese mixture and pour that into the pan. Place a lid on the pan to help speed up cooking and keep the pork tender. You will soon create a creamy (yet healthy) delicious sauce to accompany your pork.

Serve with a side of rice and a vegetable for a healthy, tasty and easy meal!

(The bok choy seen above is delicious sauteed with some garlic, s & p and a splash of chicken broth. I also cook my rice in water but add a chicken bullion cube for added flavor and no added fat or calories.  Try it!)